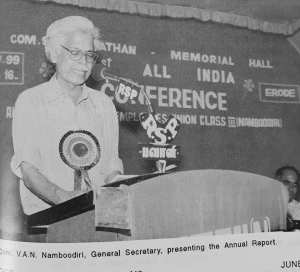 The All India Conference of AITEE Union Class III (N) at Erode from 13th to 17th May 1999 was one of the biggest and most important conferences in participation, discussion and decisions taken. More than 3,000 delegates participated. No AIC could be held for long 5 years due to the court cases imposed upon us by the revisionist group on membership verification, all kind of attacks from the DOT, including creating difficulties in publication of journals etc.
The Reception Committee with Com.S.Mohan Doss as President and Com.S.Chellappa, Circle Secretary as Convener, had made excellent arrangements for accommodation, food and conduct of the Conference. Coms. K.Adinarayana, Secretary General NFPE, John Moses, General Secretary, Janatha Dal, S.K.Vyas, Secretary General Confederation, Moni Bose, former General Secretary, E.III Union, P.S.Raman Kutty, GS T.III Union, K.Ramani, former M.P., Brinda Karat, K.Noorjehan, PMG, R.N.Goyal, Member (Telecom Production), DOT, V.R.Chandrasekharan, GS, ITEU, R.S.Yadav, Veteran leader from U.P., P.Abhimanyu, AGS, Viduthalai Virumbi, M.P. and many other leaders addressed. Com.K.D.M.Tripathy, President, presided. About 60 delegates participated in the discussion.
A grand reception was given to the former office-bearers of the Union, including Com.Anantha Bhattacharjee, J.Renganathan etc. Com.KDM Tripathy was elected as President and Com.V.A.N.Namboodiri as General Secretary.
The AIC also finalized the Charter of Demands including ‘No Privatisation’ and decided on the agitational programmes.
It was a wonderful Conference