The next Kerala circle Conference of AIBDPA will be held at Kollam on 11-12 November 2018. The Reception Committee with Com.V.Rajendra Babu, Mayor Kollam Corporation as Chairman, Com. M.D.Rajan as Working Chairman and Com. N.Sasidharan Nair as General Convener is making all arrangements for the successful conduct of the Circle Conference.

Delegates are advised to book  to and fro tickets in advance to ensure reservation.

Wage revision is due to the non-executives and executives in BSNL w.e.f. 01-01-2017. 21 months have passed away. The Management should take initiative in finalising the agreement at the earliest without harping on the affordability. It is the responsibility of the management to convince the DOT and get approval of the same, if required as they state.

Employees and pensioners can not be penalised by delaying wage revision and pension revision.

The next All India Conference of BSNL Employees Union will be held at Mysuru, Karnataka, from 17th to 20th December 2018. The dates fixed earlier for the AIC in January 2019 has been preponed in view of the declaration of the central trade unions for two days strike on 8-9 January 2019.

The Mysuru Reception Committee is making all arrangements for the successful  conduct of the Conference.

As per the decision of the United Nations General Assembly held on 14th December 1990, 1st October is observed as  ‘International Day of Older Persons’ throughout the world.  On the day, the contributions of the senior citizens / older persons are remembered and the problems faced by them and how to sort out the same are discussed.

The older persons have contributed their mite for the progress of the society in which they live, in the fields of education, agriculture, science, law, industry, medicine and so on. They have sacrificed their lives for the improvement of the living conditions of the people. They are still capable of contributing much through their wisdom and experience. This has to be utilised.

Ageing is a natural process.  The aged persons face a lot of problems including isolation, illness, humiliation and so on.   They part of the society and they cannot be isolated or humiliated.

As per statistics, the numbers of aged persons are increasing every year.  The average age has increased from 46 to 68 during the period from 1950 to 2010. Some experts have noted that the average age will increase above 80 by the end of the century. At present there are about 80 crores of people who are aged above 60 years.

In such a situation, the World Health Organisation(WHO) in its Madrid conference in 2002 has adopted certain guidelines how to improve the conditions of the aged persons and make their life better. The Madrid Declaration called upon the nations to ensure the human rights of the aged persons, end the discrimination, insult and crime against them, along with ensuring the right to work and right for a healthy living. They also have the right to be part of framing the policy of the government.

But the sad fact is that many of the countries have not taken any steps to implement the Madrid Declaration. In the name of austerity,  social security measures like pension, gratuity, allowances etc. are either reduced or completely taken away. Of course, the socialist countries like Cuba have taken many important steps for improving the status of the older persons.

The Maintenance and Welfare of Parents and Senior Citizens Act 2007  passed by the Parliament ensures many safeguards and social security measures for the senior citizens, but it is seldom implemented in many parts of the country. The general situation is that the senior citizens mostly are being ignored and social security measures are not implemented. The conditions of the widows are most pathetic.

A different picture can be seen in Kerala, where the LDF government has implemented a lot of measures for the aged persons. Rs. 1,100 is paid to all those above 60 years as social security pension. Palliative care is ensured for those people who are not able to move.  Senior Citizens’ Councils are formed with representatives of the organisation of the aged persons to address the grievances. The demand has been raised for a separate Department for the senior citizens.

This year also, the International Day of Older Persons will be observed all over the world. Let us dedicate ourselves to ensure that the senior citizens have a respectful and healthy life. Let us remember that the senior  citizens are a great  asset of the society.

The 6th meeting of the Joint Committee on wage negotiation of the Non-Executives, was held today. All the members of the Staff Side, as well as the Management Side, were present. Discussion continued on finalising the pay scales. Based on the live cases received by the Staff Side, demand was raised in today’s meeting, that the maximum of the NE-4 and NE-5 should be modified, so as to give the provision for one more increment. This is necessary to avoid stagnation. The Management Side accepted to examine the demand of the Staff Side. Further, the Staff Side demanded that, the agreement on pay scales can be signed and sent immediately, for the approval of the DoT. To this, the Management Side replied that, the inputs regarding the financial implication for revision of allowances and perks also has to sent to the DoT, along with the proposal of revision of pay scales. In view of this, it is decided to discuss the revision of allowances and perks in the next meeting to be held on 09.10.2018. (Courtesy: BSNLEU website)

We heartily welcome the Supreme Court judgment allowing women to enter the Sabarimala temple, thus ending a long pending discrimination. Though there may be some resentment from some quarters now, just like on similar issues, the society will accept this fully within a short time. Congratulations to the Supreme Court for the timely decision.

As per the increased cost of living index BSNL employees and pensioners are eligible for 7.6% increase in IDA from 128% to 135.6%. Orders are expected soon. 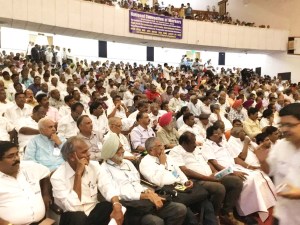 The National Convention of Workers under the aegis of Central Trade Unions and Independent Federations held at Mavlankar Hall, New Delhi on 28-09-2018 has decided for a two day strike on 8th and 9th January, 2019. A resolution adopted by the convention stated that the NDA government did not bother even for the slightest change in their pro-corporate neo liberal policies after the three day Maha Dharna in November,2017 participated by lakhs of workers. The resolution pin-pointed the drastic amendments being made in the hard fought earned labour laws and privatisation of PSUs. The convention was addressed by all leaders of the Central Trade Unions including Com.Tapansen MP, General Secretary, CITU.

AIBDPA fully supports the decision and calls upon all its units to organize solidarity demonstration on 08-01-2019.

October 1 is celebrated inernationally as the Senior Citizens’ Day every year. On this day, the senior citizens are honoured, their special problems are discussed, actions are planned for a respected and honourable life for them.

It is the duty of every civilized society to ensure the safe and healthy life for the senior citizens who have spent their life for the growth of the society.

The wage negotiation in BSNL has started after serious agitation and pressure. Now it is necessary that a favourable agreement is reached early for obvious reasons. The workers can not wait long. The BSNL management should come forward for a favourable settlement early, in the interest of the company and the workers.