Hundreds of BSNL workers have retired from service today after meritorious service of more than thirty years or more. My Best Wishes and Greetings to all these comrades!

AIBDPA, the militant organisation of the BSNL and DOT Pensioners, welcomes all these retirees and request them to become life members of the organisation. Let us work together for a better future for the Pensioners!

Bharat Sanchar Nigam Limited (BSNL), the telecom PSU, has completed 16 years of committed service to the people of this country.

It was on 1st October 2000 that BSNL was formed by separating the service portion from the Department of Telecom. It was against the wish of the employees, but leaders of the three federations agreed for the same on certain assurances from the government.

The first 6-7 years saw the continued growth of BSNL surpassing the private telecom companies, one after another, despite the fact that the latter were granted licence to provide mobile services more than 6 years earlier.The revenue increased up to Rs.40,000 crore, the profit more than Rs.10,000 crore and many new connections increasing every month. This was not to the liking of the private companies and corporates as also the government. The government stopped procurement of equipments by BSNL to provide connections for which there was huge demand, took away all the funds of BSNL on one pretext or another and provided all assistance to the private companies. BSNL did not collapse completely only due to the committed workforce which through sustained struggles and hard work  kept BSNL alive and growing.

After four years of loss, BSNL has got operational profit in 2014-15 which increased in 2015-16 to Rs. 3,000 crore. Still the company is in loss due to the depreciation of about Rs.3,000 crore. The programmes like ‘Customer Delight Month”, ‘Service With A Smile’ etc. initiated by the BSNLEU and Forum and co-ordinated by BSNL Management as also special packets like ‘free night service’  has gradually made the company better and will be profitable by 2018.

But the government continues its anti-PSU policy. On the basis of the report of the Niti-Ayog, government is moving for the strategic sale of BSNL and MTNL. The BJP government wants to close/sell all the PSUs to repay and satisfy the corporates who supported them and donated in the elections.

But the workers will never allow the government to implement its black agenda. 2nd September 2016 strike has been a strict warning to the government.

The number of employees have been reduced since formation of BSNL from  3,50,000 to 2,10,000 due to non-recruiting of staff in the large number of vacancies resulted by retirement.

BSNL Employees Union, which has been the recognised union  from 2004 onwards has taken initiative to organise the executive and non-executive unions under the JAC/ Joint Forum / Forum and fought many battles to keep BSNL alive and to strengthen it. Unfortunately, the Forum is divided now, with NFTE forming another Forum. Separate agitations are being organised for the same demands. Top leaders of all the unions have to discuss and come together as earlier to fight for the revival of BSNL .

when the BSNL and workers celebrate the 16th anniversary of the the telecom PSU, they are faced with many challenges. It is only through the united struggles of the workers and continuous vigil that BSNL can be brought back to its past glory. Let  all the workers and the management dedicate themselves to this noble task. UNITY FOR STRUGGLE, STRUGGLE FOR UNITY AND STRUGGLE AND UNITY FOR PROGRESS!

On this 16th anniversary of the formation of BSNL, we convey our Warm Greetings to all! Let us continue our struggle for better service to the people and safeguarding the interests of the BSNL workers, Pensioners and contract workers, who are the backbone of the company!

The decision of EPFO to invest 10% of EPF  deposit in market instead of the present 5% is condemnable. The central trade unions had strongly 0pposed this wrong move. The hard earned money of the workers are being put to risk.
The government should cancel the ill motivated decision. 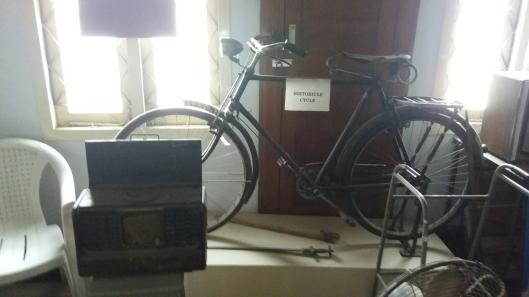 Yesterday myself along with Pankajam visited Sunderayya Vigyan Kendra, the memorial to the great Communist and legendary leader of the historic Telengana Armed Struggle. His dresses, cycle used to go to Parliament when he was M.P., utensils used, the radio, about 50,000 of books – all are kept in the museum and library. How simple a life the great leader lived! The first General Secretary of CPI (M) formed in 1964, he was the organiser of Communist Party in South India.

The Central Cabinet has decided to grant 78 days bonus for 2015-16 to the Railway workers  numbering about 12 lakh. This is the 5th consecutive year they are getting the same amount. The bonus will be paid before Puja holidays.

One more PSU has passed in to History. Today Central Cabinet has decided to close the Hindustan Cables Limited. Modi Government is on the spree to finish the PSUs one after another.

Oppose and defeat this murder of PSUs.

Manoj Sinha, Communications Minister yesterday told the BSNL Management and employees to perform well. He also spoke about ‘performance related pay’ and VRS for ‘inefficient employees’. Well advice!
Shall we remind the Minister that it was not because of non-performance of the employees that BSNL came down; It is the same employees who had made BSNL grow year after year, increasing profit to Rs.10,000 to Rs. 12,000 crore with a revenue of Rs.40,000 crore.
It was the Communications Minister and government who cut the procurement of equipment, taken the funds of BSNL on one pretext or other and made the PSU loss making. We appreciate the new Minister for making payment of the 2014-15 USO Fund of Rs.1250 crore to BSNL, but much more is to be done. Refund the charges for spectrum returned, waive licence fee and taxes of BSNL, recruit sufficient staff, procure adequate equipment, give sufficient training to staff etc. will make a great change. Is the government ready for the same?
Due to the sustained efforts of management and workers the market share has gone up to more than 10%, thousands of additional towers are erected, BSNL has become the maximum new mobile provider – yes BSNL is advancing. The Minister should help the BSNL to restore its past glory.

The massive dharnas yesterday (27th September) all over India by BSNL Casual and Contract workers should open the eyes of the management to the genuine problems of the workers and settle the same. The brutal exploitation of the low paid employees should be put an end to.
The BSNL Management should remember that it’s credibility and honour are at the lowest level as a result of this exploitation and corrupt practices by denying the due wages and social security measures to the casual contract workers engaged for BSNL.