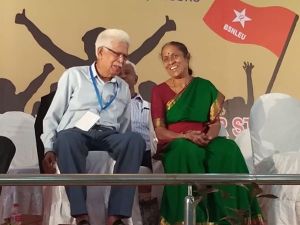 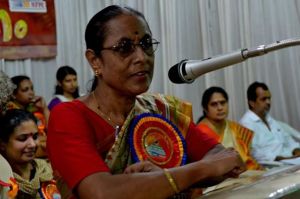 Sad News! Com. R.Seethalakshmi, former General Secretary of All India Postal Employees Union, Postmen & Grade IV, Vice-President NFPE and Convener CG Employees Women Coordination Committee passed away on 1st August at a hospital in Bengaluru.
Com.Seethalakshmi was a capable leader, whose life was dedicated to serve the postal and central govt employees.
During her tenure as GS at Delhi we had the opportunity to participate in many meetings together, some of which were held in her office or my quarters. She was always outspoken. She had clear ideological outlook on how to improve the lot of workers. She was the only woman who became the GS of any P & T union in my memory.
For preparing my book on ‘ History of P & T Trade Union’, she, like other GSs, helped by allowing to refer to the old P&T journals kept in her union office.
After vacating her post she returned to Bangalore and was closely connected with CITU and progressive movements.
I think the last time I met Com. Seethalakshmi was at the AIC of BSNLEU where she addressed the conference.
In her death the TU movement has lost a valiant leader.
I convey my heartfelt condolences to the family, friends and comrades.
Red Salute to Com. R. Seethalakshmi!