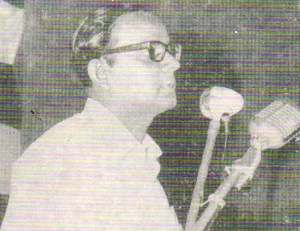 Com.K.G.Bose, the Guiding Star of P and T and CG employees’ Movement

7th July 2020 is the 100th birth anniversary of Comrade Krishna Gopal Basu (Com.K.G.Bose), who transformed the P and T as also the Central Government employees trade union movement in to a fighting force based on the working class ideology and progressive thoughts. He was an employee of the Posts and Telegraphs Department for only about 7 years having been dismissed in connection with the proposed strike in 1949, but his entire life was dedicated and sacrificed for the cause of the Central and P and T employees in particular and the working class in general.
He was born as the third son of his parents Shri Jaya Gopal Basu and Smt. Nivanani Basu. Jaya Gopal Basu was a teacher, as also a well-known poet and writer. Both his father and elder brother died in an accident in 1926 and his eldest brother became invalid due to serious illness and passed away in 1937. KG’s mother had to struggle hard to maintain the family consisting of KG, younger brothers and sisters. Both KG and brother Moni completed their studies with the help from Ramakrishna Mission. First KG worked in a private company and then got appointed as a clerk in the office of the Divisional Engineer Telegraphs, Calcutta in 1941. It was a great relief to the struggling family. While studying he was very active in the Marxist Study Group there.
From his joining the department, he became active in the Indian Telegraph Association (ITA) formed by the great pioneer, Henry Barton. He became Branch Secretary in no time. His brother Moni Bose also got job in the same office in 1945.

There were a number of unions in P and T at that time, including All India Post Office and RMS Union started by Babu Tarapada Mukherjee, Postmen and Lower Grade Staff Union started by V.G.Dalvi Bar-at-Law and Indian Telegraph Association. Most of them were led by reformist leadership.

It was at this time that the Postmen and Lower Grade Staff Union declared indefinite strike from 11th July 1946. Although started as Postmen strike it spread to all wings of the P and T Department. Under the inspiring leadership of Coms.B.N.Ghosh (Dada Ghosh) and K.G.Bose the strike was complete in Posts and Telegraphs in Bengal. The strike and rally organized by the Trade Unions in support of the strike on 29th July 1946 in Calcutta was the biggest rally in the city till that time, participated by about 15 lakhs workers engulfing the entire city.

The strike spread throughout India and the British Government was compelled to discuss with the unions and fully concede the major 12 demands raised in the strike notice. After 23 days, strike was withdrawn on 3rd August 1946. It was a big success. In Bengal the strike continued for three more days and another demand “Good Conduct Pay” was achieved. The P and T Strike in 1946 is considered as part of the great freedom movement as in the case of the Naval Mutiny.

In the formation of the Union of P and T Workers (UPTW) in 1946, merging most of the Unions in P and T, though a youngster, K.G.Bose took a prominent role. The strike planned by UPTW in 1949 could not materialize since all the leaders and many of the delegates who reached Madras for the Supreme Council to take final decision were arrested and jailed. Com. K.G.Bose and many others were arrested from Calcutta itself and jailed. The proposed strike was crushed ruthlessly.

Both Coms. K.G.Bose and Moni Bose were dismissed / terminated from service in connection with the 1949 strike. The case against the dismissal of KG continued for a long time, but finally his dismissal was confirmed in 1961. Moni also was not reinstated.

KG became a full time union worker. National Federation of P and T Employees (NFPTE) was formed on 24th November 1954 through the realignment scheme, merging all the existing unions in the Federation. Through the realignment, a Federation with nine affiliated all India unions was constituted. It was a great achievement in bringing unity. Com.K.G. became one of the most important leaders of NFPTE in Bengal.
The 5 Days Glorious Strike of 1960 by the Central government employees was the biggest strike in Independent India till that time, participated by lakhs of workers. Com.KG took a leading role. Com.K.G.Bose was elected as the Circle Secretary of the Postal Class III Union and later elected as the All India President in 1963.
12th July Committee, a Co-ordination Committee of Central, State, Public Sector, Local Self-Government Employees’ Unions etc. was formed in Bengal in 1966. He was elected as its first Joint Convener appreciating his great contribution in bringing the unions together to form the Committee.

Com.K.G. Bose toured all over India in preparation and for organizing the One Day Token Strike of Central government employees in 1968. The central government dealt the strike in a ferocious way arresting, terminating, dismissing and punishing tens of thousands of workers. 17 comrades became martyrs to the brutalities of the police / CRPF and also crushed under the trains when picketing. Com.K.G. along with others made herculean efforts for vacating the victimization.
The fight against the reformist and revisionist leadership continued. In 1970 Vijayawada Federal Council, contest took place and defeating the revisionist leadership, KG Bose was elected as the President of NFPTE with Com. A.S.Rajan as the Secretary General. For the first time in the history of NFPTE, a Worker President was elected. Till that time, it was only Members of Parliament or Central TU leaders, who were elected as President.

In the next Federal Council held in 1971 at Calcutta, OP Gupta group floated a parallel list of office-bearers and disrupted NFPTE. Some of the affiliated unions and the Confederation of CG employees were also disrupted.
In 1969, KG was elected as an MLA in W.Bengal Assembly and later nominated as a Member of the Pay Commission for the State Government employees. Both the responsibilities he fulfilled with credit.

Com. K.G.Bose played an inspiring role in the massively participated P and T Convention, EDA Convention and Bonus Convention held at Delhi in 1972. It was a show of strength by the KG-Iyer-Adi progressive leadership in the Federation.
All these hectic activities had a disastrous effect on his health. On a checkup it was found that the dreaded cancer has caught with him. But he continued his work without break.

It was during this period in 1973 that he came to Calicut. He was given a warm reception at the Railway Station by hundreds of P and T and sister unions and he addressed largely attended meetings. We never knew at that time that he was suffering from cancer. He did not tell also.

He was taken to London for expert treatment. But to the extreme sorrow of all, sad news came that our dear Com.K.G. left us forever on 11th December 1974. He was only 53. He left behind his wife Smt. Parul Bose, a trade union leader herself and their son Dipankar Bose and family. KG’s younger brother Com.Moni Bose was also in the leadership of the movement and was the first Patron of the BSNL Employees Union and earlier General Secretary of the E.III Union.

The following extract from his letter from London Hospital to the Calcutta Comrades shows his anxiety and keen interest in workers, even when was seriously ill:
“I want to survive and continue my uncompromising fight against all injustices and in this struggle I am not alone. Thousands and thousands of comrades are with me and they are the source of my inspiration…. “We cannot be a party to any proposal which may be considered as surrender of the principled stand by the common workers”.
The own building of BSNL Employees Union in Delhi purchased in 2010 was named “ K.G.Bose Bhawan” in his memory.

I had a long association with Com.K.G. since 1963 when I met him at the Trivandrum All India Conference of E.III Union and where his intervention with the P and T Board Member Mr. Sen Gupta resulted in the cancellation of Rule 14 charge sheets imposed on me and other 7 others for organizing a strike at Kannur. Since then, in the All India Conferences and Federal Council Meetings he was the guiding force for all of us. He visited Calicut twice on our invitation and addressed widely attended meetings. The P and T Union office at Calicut is also named after him and inaugurated by his wife Com. Parul Bose, probably the first building dedicated to his memory.

It is heartening to note that the birth centenary of Com. KG Bose is being observed for one year from 7th July 2020 by various organizations.

In this juncture, when more and more attacks are coming against the working class and whatever gains they achieved through struggles are being taken away, the memory of Com.K.G.Bose will strengthen us to continue our struggle and forward march.

Com.K.G.Bose was the guide, ideologue and leader, who led the P and T and CG employees movement on the correct path. He was a Shining Star for a whole generation of young comrades like me.