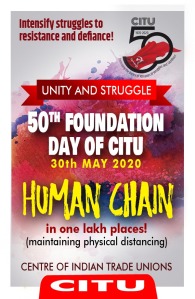 30th May 2020 is the 50th foundation anniversary of Centre of Indian Trade Unions, the most militant trade union in the country. CITU was formed in the Kolkata Conference held on 28-30 May 1970. Com.B.T.Ranadive was elected as President and Com. P.Ramamurthy as General Secretary. Com. E.Balanandan was Vice-President and Com.M.K.Pandhe, Secretary.  More than 10 lakh workers participated in the rally held Brigade Ground Kolkata  in connection with the foundation Conference. This conference took the decision that it was completely difficult to continue in the All India Trade Union Congress (AITUC) since it has failed to follow the militant and correct path of trade union and has gone to the revisionist line as also all democratic traditions were broken to destroy any reasonable criticism.

AITUC was the first Central Trade Union in the country formed on 31st October 1920. It continued as the sole CTU in the country till INTUC was formed by the Congress just before India got Independence. Now there are mainly 12 CTUs in the country. Out of this, except BMS, all the other CTUs are in coordination to fight against the anti-worker policy of the central government. Since 1991 the trade unions have been organising sustained struggles  against the neo-liberal policies started by the Narasimha Rao Government. Independent Federations of Central – state government employees, PSUs etc. also have been joining the strikes. The first united country wide strike against neo-liberalisation policy was organised on 29th November 1991. Since then many strikes have taken place against the anti-worker policy of the central government, more and more unions joining the same.

CITU has become one of the most militant and worker oriented trade union in the country. It is affiliated to the World Federation of Trade Unions (WFTU). WFTU has now intervened in the anti-worker decisions of the central and some state governments in increasing the working hours misutilising the Covid period.

It is in this context that the 50th Foundation Day of CITU is approaching. The CITU HQ has called upon its units all over the country to organise Human Chain on the day, of course by keeping social distance as per the Covid 19 existing instructions.

UNITY AND STRUGGLE FOR PROGRESS!