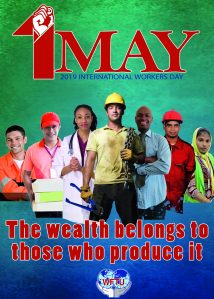 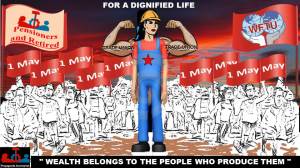 1st May, May Day, the International Day of Working Class, is here again. The May Day is being observed and celebrated through out the world by the workers and other toiling masses. The World Federation of Trade Unions(WFTU), Trade Union International (Pensioners and Retirees) and the Central Trade Unions have given call to observe the day.
The WFTU slogan for May Day this year is “The wealth belongs to those who produce it”.

The memory of the Martyrs of Chicago, August Spies, Fischer, Engel and Albert Parsons who were hanged by the US government inspire the working class world over. The “The Eight Hour Day Movement” by the Chicago workers and agitating for the same and the Hay Market meeting was the reason for charging the leaders with conspiracy and execution on 11th November 1887.

It is through such struggles and strikes that the working class have been able to achieve many gains and victories.May Day 2019 comes at a time when the working class is facing many challenges. The neo-liberal policies being implemented by the imperialist and capitalist class has created misery and heavy burden on the people. For maximising their profits, the corporates and financiers can go to any length, as we have seen. At the same time struggles are going on in many countries against these anti-people policies.

It is not different in India. The Central Trade Unions are unitedly fighting against the neo-liberal policies of the government. The workers rights are being attacked by the Modi government. The hard won gains of the working class are being snatched away. The struggle to defend the already achieved rights and for further improvement will continue.The struggle to save BSNL continues. May Day is being organised as “Save BSNL – Save Nation Day” by BSNL workers.

Let us observe the day by organising meetings, rallies etc. in an effective way.

MAY DAY GREETINGS TO ALL!

2 thoughts on “May Day Greetings!”