Mumbai, Mar 6 CPI(M) general secretary Sitaram Yechury today said the present regime at the Centre would resemble “Hitler’s fascism model” if a parallel is drawn with history, even as he accused BJP and RSS of manufacturing the debate on nationalism to serve their agenda of “Hindu” rashtra.
“An aggressive nationalism debate has been manufactured by the BJP and RSS so that they can force their agenda on the nation. They want to convert a democratic, republic and a secular country into a Hindu rashtra,” he told reporters here.
The senior Left leader alleged that nationalistic feelings of people are being misused.
“If a parallel were to be drawn of the present government with history, the present regime resembles (Adolf) Hitler’s fascism model,” he said.
Yechury said the patriotism debate was manufactured for specific reasons as “the government is unable to handle the massive expectations people had. Also, people are grappling with financial stress of which the government can do nothing about”.
He alleged the government intends to let private banks take over their public sector counterparts who, as per conservative estimates, have lost around Rs 6 lakh crore due to non-payment of loans.
“There has been a 26 per cent rise in farmers’ suicides during two years of Modi’s rule. (Crude) oil rates have fallen drastically but consumers have not benefited. There is frustration among people. The government is scared that all this does not transform into an agitation and thus this nationalism debate is created,” he said.
Replying to a query, he said if Jawaharlal Nehru University is compared with its peers, “its contribution in IAS, IFS, IPS is large and people’s money is being used properly”.
“You will find a JNU product everywhere. So there is no wastage of taxpayers’ money. JNU students are also soldiers who are fighting for a better India,” he said referring to the criticism of the university and its students by the right-wing parties. (Courtesy: Ganashakti) 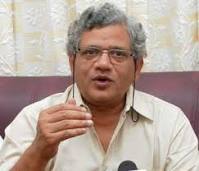 New Delhi, Sep 26: CPI (M) today hit out at Narendra Modi over his recent dig at “secularists”, saying it is “completely unbecoming” of the Prime Minister and was unprecedented for a person holding the top post to “settle” domestic political issues when abroad.

CPI (M) general secretary Sitaram Yechury also said it was “unfortunate” that the Prime Minister has undertaken “so many” foreign visits and quipped that since Modi has spent “more time” abroad, he is finding little time to settle domestic political issues when in India.

“It’s completely unbecoming. As a Prime Minister of our country, it has never happened that the domestic political issues have been settled by the Prime Minister abroad.

“Now it’s a different matter that Modi is spending more time abroad than in India. Therefore, he may not have time in India to settle the Indian political issues, so he is doing it abroad,” Yechury told reporters.

The Rajya Sabha member said it is “unfortunate” situation that the Prime Minister has undertaken “so many” foreign visits during the 16-month tenure.(PTI)

Kolkata, Jun 22 : Scotching speculations of going with the Congress in its fight against TMC in Bengal, CPI(M) general secretary Sitaram Yechury today said the party will follow the resolutions adopted in the last Party Congress of not aligning or joining any front with the Congress.

Senior party leader Gautam Deb on Friday last had kicked up a political storm by stating that the Left Front in West Bengal was now left with not enough strength to defeat the Trinamool Congress in the next Assembly elections and had hinted at an “understanding” with the Congress, saying “there

was a need for a greater alliance with other like-minded political parties to defeat the TMC regime.”

“He (Deb) did not say what is attributed to him, that we will go with the Congress,” Yechury told reporters when asked to comment on the CPI(M) central committee member’s statement advocating an alliance with the Congress. (PTI)