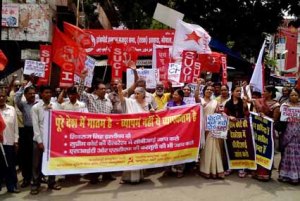 A Massive Protest demonstration was organised by the CPI(M), CPI and other Left Parties in Bhopal today, demanding impartial inquiry in to VYAPAM SCAM and resignation of MP Chief Minister Shivraj Singh Chouhan. The demonstration was led by Com. Subhashini Ali, PB Member of CPI(M) and other leaders. A Bandh was also organised in the state.

The continued exposures of the BJP Ministers and leaders in the Vyapam Scam compelled the state government to refer the matter to the CBI, but the CM who allegedly tried to cover up the scam still continues in the CM position.