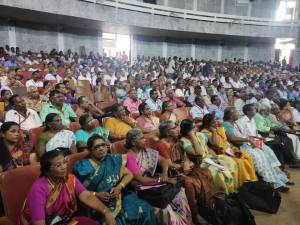 The subject session held in the afternoon on 11-11-2018 was inaugurated by Com.K.G.jayaraj, General Secretary with a detailed speech covering all the issues of the pensioners. Com.N.Guruprasad, Circle Secretary presented the biennial report. Thereafter a very useful seminar was held with Com.P.V.Chandrasekharan , Patron as moderator. The seminar was inaugurated by Com.P.K.Gurudasan, veteran leader and former minister of Kerala. The subject , ” Social security of elders in the neo-liberal period” was presented by Shri.Alexander Jacob, Former DGP of Kerala in an effective and admirable manner. Coms.C.C.Pillai, former Secretary General,NFPE and P.K.Muraleedharan, Convenor,NFPE,Kerala. Com.K.Damodaran, Organising Secretary welcomed and Com.K.Mohanan Pillai, Joint Convenor, Reception Committee thanked.

When the session resumed on 12th morning, Com.K.J.Sanalkumar, Treasurer presented the biennial audited accounts. In the discussion that followed, 32 comrades participated which was replied by both the General Secretary and Circle Secretary.Then the report and accounts were adopted . 479 delegates from all districts participated.

The Reception Committee with Com.V.Rajendra Babu (Chairman) and N.Sasidharan Nair made excellent arrangements for the successful conduct of the conference.