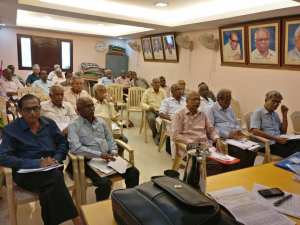 The National Executive of NCCPA was held effectively at EB Guest Hose, Chennai on 05-08-2018. Com. S. S. Roy, Working President presided in the forenoon session, followed by Com. Shiv Gopal Mishra, President. Com.K.K.N.Kutty briefly spoke on the agenda issues and the National Executive discussed the issues with all seriousness. Participating in the discussion, Com.K.G.Jayaraj, General Secretary raised the issues of organizing followup action after the 25-10-2017, Pension revision of BSNL pensioners with effect from 01-01-2017 with 15% fitment on IDA pattern , delinking the wage revision, Attempts by BSNL management to curtail the medical facilities and our demand of Rs.2000 as monthly medical allowance, Option 1 ,Exemption of pension from income tax, denial of full pension to pre 2006 retirees with less than 33 years service and the CGHS issues. Com.V.A.N.Namboodiri, Advisor and Patron, NCCPA, K.Raghavendran, General Secretary, AIPRPA and a host of leaders, representing various constituent organisations spoke.

A four phased programme of action was decided to be conducted as a followup action for the settlement of the 10 point charter of demands.

Decision was also taken to increase the price of the NCCPA News Letter to Rs.6 and to widen the subscriber base.

Com.Shiv Gopal Mishra briefed on the outcome of the meeting of NJCA held 17th July, 2018 and stated that another meeting is slated to be held on 18th August, 2018 to review the progress on the important issues and will take appropriate decision including revival of indefinite strike.

The resolution moved by Com.V.A.N.Namboodiri demanding pension of Rs.1000 for all the workers in the country of above 60 years , was adopted unanimously.

After thorough discussion it was decided to explore the possibilities of approaching the court on the issue of Option 1. (Courtesy: AIBDPA)