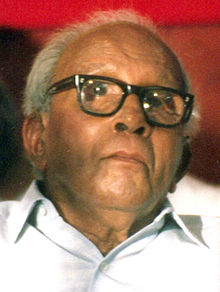 13 June 2018 is the 109th Birth Anniversary of Comrade EMS Namboodiripad, former General Secretary, CPI(M), first Chief Minister of Kerala and one of the most respected ideologue of the Communists. His political life extending about eight decades were closely interlinked with the growth and progress of Kerala. A voracious reader, comrade EMS also wrote many books, articles, reviews, pamphlets etc. which have now been compiled and published in 100 volumes. It is a valued treasure.

He was closely connected with the P&T Trade union movement and attended many conferences of the union, including the All India Conference of the AITEE Union Class III held at Thiruvananthapuram in 1994, where I was elected as the General Secretary of the union.

His strictness for time and timely completion of any work is well known. This I have seen myself. Once I have the opportunity to travel with him from Calicut to Mangalore, where he was to address a meeting of NFPTE. He was continuously writing and by the  time we reached Mangalore, he put the same in a cover, wrote the address and told me to post it immediately so that it will reach Chintha next day itself.

An interesting incident also happened. While addressing the meeting  at Mangalore Head Post Office on  the day, he saw the photo of Babu Tarapada Mukherjee, pioneer of the P and T TU movement,  fixed on the wall and asked whose photo it is. When I mentioned that it was the photo of Babu Tarapada, Union leader, he smiled and commented: ‘ so, you have your union leaders’ photo in the Post Office also.’ I mentioned to him also that since there are no place in many Post Offices for holding meetings, we usually hold the same in the office,after office hours.

In his nearly seven decades of public life and revolutionary activities, E.M.S. Namboodiripad left an indelible imprint on the progressive and working class movement of the country. As a young man, he became active in the social reform movement against caste. He left college in 1931 to join the freedom struggle and was jailed in the satyagraha movement. From then on wards, he played an important role in the Congress movement and was one of the founders of the Congress Socialist Party in Kerala. In 1934 he became the all India joint secretary of the Congress Socialist Party. It is in this period that E.M.S. while leading the Congress Party as General Secretary of the Kerala Pradesh Congress Party became acquainted with Marxism. He was one of the five members who formed the founding group of the Communist Party in Kerala in 1936. E.M.S. Namboodiripad represented the coming together of the two streams, the anti-imperialist and the anti-feudal struggles, which laid the foundations for the development of a powerful communist movement in Kerala. He was one of the key proponents of Aikya Kerala which led to the formation of Kerala as a unified linguistic state.

E.M.S. Namboodiripad was first elected to the Madras Provincial Legislative Assembly in 1939. As an important leader of the fledgling Communist Party he donated the proceeds of his landed property to the Party. He went underground building the Party in crucial periods between 1939-42 and 1948-50. He was elected to the Central Committee of the Communist Party of India in 1941. He became a member of the Polit Bureau of the CPI in December 1950 and later its Secretariat. He became General Secretary of the united CPI in 1962.
In 1957, after the state of Kerala was formed in the first elections in 1957, the Communist Party won a majority and E.M.S. Namboodiripad became Chief Minister of the first elected Communist ministry in India. It was the EMS ministry which initiated the path breaking land reform legislation and other democratic measures, till the ministry was dismissed undemocratically in 1959. E.M.S. Namboodiripad became Chief Minister of Kerala again in 1967 heading a United Front ministry till 1969.
E.M.S. joined the leading group from the united Party who formed the CPI(M) and was elected to the Central Committee and the Polit Bureau of the Party at the Seventh Congress of the Party in 1964 and he continued to serve in these positions till his death.
E.M.S. Namboodiripad was elected the General Secretary of Central Committee of the Communist Party of India (Marxist) in 1977 and he led the Party in this capacity till the 14th Congress in 1992 when he stepped down due to ill-health. His leadership in rallying all the Left, democratic and secular forces was invaluable.
E.M.S. was a brilliant Marxist theoretician. He made outstanding contributions to the application of Marxism-Leninism to Indian society and in working out the strategy and tactics of the Indian revolution. His vast body of writings bear the mark of an original and creative mind which mastered the dialectics of Marxist theory. His writings on land relations, Kerala, society and politics and his writings on Marxist philosophy, literature and history — mark him out to be one of the most influential communist thinkers of the country and the world.
E.M.S. Namboodiripad was a rare example of a Communist leader who hailing from a traditional landlord family graduated to become the foremost leader of the proletarian revolutionary movement. He spent three years in jail and six years underground. His was a life of sacrifice and simplicity. He set an example which has inspired tens of thousands of communists all over the country. In Kerala he was a legend in his lifetime

We cherish his memory and our close association with him.Red Salute to Comrade EMS!