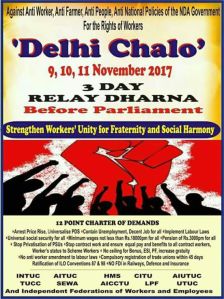 A warm reception was accorded in the evening of 30th October to the delegates of the various central trade unions and service associations at Calicut going to attend the Maha Dharna at New Delhi on 9-11 November 2017. All the CTUs and service associations attended in large numbers. The Dharna is being organised on the demands of the workers and against the anti-worker policies of the government.

Through out the country full preparations are going on for the successful holding of the dharna. It will  be organised in the Parliament Street itself.