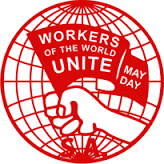 FISE expresses its support to the workers of Brazil, for the 30 June, General Strike.

The workers of Brazil, on June 30 go on strike all over the country against the antiworkers’ reforms, planned by the Government of Brazil.

The struggle for full time, steady jobs, decent wages, Public and Free Social Security, Healthcare and Educations, is a struggle of the working class all over the world against business groups and the Governments, who serve them.

FISE expresses its solidarity and support to the workers’ mobilizations in Brazil.