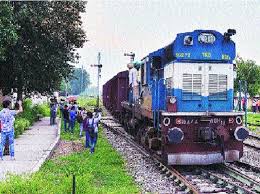 Not remembering date and year. After Circle Conference at Khammam had to Return to Delhi by G.T.Express reaching Khammam from Chennai at about 00.30 hours in midnight. Reservation already made. Along with Com.J.Sampath Rao, P.Asoka Babu etc. reached the Railway Station in the nick of time. Train was already in the station and was starting to move. My three bags with warm clothes, union records etc.were just thrown inside my reserved compartment by our comrades, I got in and train started. I went to my berth and sat with relief.

All of a sudden, I felt something was wrong. The compartment was almost empty. GT used to be always full. One boy was sitting in the side seat. On asking I found out to my dismay it was a train to Hyderabad or so. I had to attend urgent meetings on 10th and 11th at Delhi including with Secretary, DOT. I had somehow to catch GT to reach Delhi in time. I pulled the chain but it was not moving. It was in a fixed condition. Even other wise, there was no meaning since the train has already passed much beyond the station. I realised that GT Express is yet to come. In our haste to get in we did not notice which was the train. In the hope that I will change the train at the next station after getting down and catching the coming GT, I referred the Railway Time Table, which I always carried with me. But GT will reach that station, before this train reaches there. That means, this train will stop somewhere and allow the GT to pass.

The train stopped after some time in a very small station. In the platform, there was no light. I got down with my luggage. Knee high grass was all over. I walked back to the Guard’s compartment and spoke to him. I requested him to get the GT Express stopped there so that I can get in. He ridiculed me stating that how can GT stop there, where there is no stop. He told me to get inside the train, get another train next day for Delhi. He also warned me that this is naxal area and you have to be very careful. When I insisted, he told me to go to the first platform where the Assistant Station Master will be there and seek his help. I crossed all the three tracks of railway lines got up to the platform on the other side with much difficulty. The Station Master was in his small room. No other building. It was a very small station, probably with only one or two trains in the whole day.

First he was taken by surprise seeing me like that. Then I explained and pressurised him to somehow stop the coming GT express to enable me to catch and reach Delhi in time. He was sympathetic. He contacted the control room and conveyed my request. He was shouted at by the Control room for putting such a request. The ASM, then called the Guard. Guard contacted Khammam, but GT has already left. By the time, we could see the train coming. All of us got down near the central track. Seeing us and sensing some accident or so, he slowed down to find out. In short, I was able to get in to the train and continue my journey. A woman was sleeping in my berth, but when I told her that it is my birth, she readily vacated.

I reached Delhi on 10th and could attend the scheduled meetings. When I spoke to Com. Sampath Rao after reaching Delhi, he also told that they also realised later that I had boarded the wrong train. A wrong train and a right train!