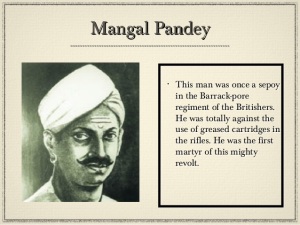 8th April 2020 is the 163th year of martyrdom of Mangal Pandey, who fired the first shot at a British Officer, heralding the First War of Independence (Sepoy Mutiny). He was a sepoy in the 34th Bengal Native Infantry Regiment of the British East India Company, who shot the Officer on 29th March 1857. He was only about 30 years old.

However he was caught and executed by hanging on 8th April 1857 by the British officers. But within days the mutiny started and within weeks the entire north India, including Delhi, Meerut, Lucknow – all was under the control of the sepoys., the freedom fighters.

However, enhancement of well equipped British Army, lack of uprising in Bengal, Punjab and South India,  the difference of opinion among the princes/leaders of the mutiny,  the change of mind by the feudal lords and money lenders  that they will be more safe under British – all gave the British the upper hand and the ‘First War of Independence’ was crushed.  But within 90 years, the British had to go back and India got independence in 1947.

On this day, 8th April 2017, we remember and pay homage to the great martyr Mangal Pandey!