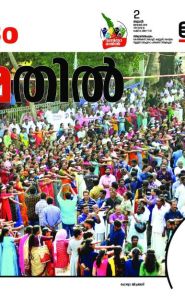 The New Year 2019 in Kerala saw the women power with more than 50 lakh of women participating in the Vanitha Mathil (Women’s Wall) in Kerala from the north end to the south end about 620 km demanding equal Justine to the women and gender equality. Neither Kerala nor even the world have never seen such a massive mobilisation of women any where. While in the entire stretch of Kerala the was formed, but in many places, including towns and cities, it was three or four  lines with maximum participation. They  lined by 16.00 hours in the evening and took pledge to carry forward the progressive ideals and equality for women. In many places there was another line on the opposite side of the road formed by men in support of the wall.

The women came from all sections of the society. There were old and young women, some even taking their small children with them.

Massive meetings here held in many centres after the formation of the wall, which was addressed by leaders of various organisations and political parties declaring to carry out the move started by the women’s wall.