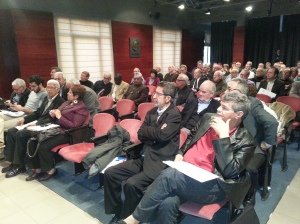 A Brief Report on the Foundation Congress of TUI ( P&R), WFTU held at Barcelona on 5-6 February 2014

The Foundation Congress for forming the Trade Union International (Pensioners and Retirees), WFTU was held at Barcelona, Spain on 5-6 February 2014. About 60 delegates from 40 Federations/Unions in 20 countries from all continents participated. There were many observers and visitors also. From India 3 delegates attended. Com.V.A.N.Namboodiri, Adisor, AIBDPA and Patron, NCCPA attended on behalf of these two organizations, deputed by CITU. Coms.G. Natarajan and D.Goplakrishnan were the other delegates.
.
Inaugural Session

The Inaugural Session was held at a spacious hall in the centre of the city, Barcelona, on 4th February 2014, participated by about one hundred delegates/visitors including special invitees and important trade union leaders from Spain. Since the Congress was going to be held somewhat away from the main Barcelona City, this inaugural Session was organized to get media and public attention in the city. Comrade Quim Boix, Chairman of the Preparatory Committee, presided. The aims and target of forming the new TUI for Pensioners and Retirees were explained by the President. Leaders of various organizations and delegates from a few countries addressed. Com. V.A.N.Namboodiri addressed the Open Session on behalf of the Pensioners Organisations in India and congratulated the organizers and WFTU for this important step.
In many countries including Spain, the World Federation of Trade Unions (WFTU) is called as Federacion Sindical Mundial (FSM), the Spanish equivalent for WFTU.
Foundation Congress of TUI (P and R)
The Foundation Congress of the TUI (P and R) was held in Masia Cottage, on a hill-top surrounded by trees and thick vegetation. The cottage and facilities available are owned by a Lawyers Collective Team in Defense of Workers’ Rights called Col-lectiu Ronda and was allotted free for use to the Congress. All appreciated the arrangement for accommodation, food etc. which was done in a very efficient manner by the Spanish CSU of Pensioners and Retirees along with the JUBIQUE organization based in Madrid, the capital of Spain.
The Delegates Session held on 5th February was presided over by Comrade Quim Boix, Chairman Preparatory Committee. After welcoming all the delegates by the leaders of the Organising Committee, the President explained in detail about the back ground – decision of WFTU Athens Conference to form a TUI of P and R, the meeting of the Preparatory Committee in S.Africa, the meeting of the WFTU/FSM in Athens out of which the present foundation Congress is being held. The draft document for this Congress was prepared after all these deliberations. He also mentioned about the powerful agitations organized by the pensioners and retirees in various countries against the cut in pension etc. imposed after the recession which continues till now. He read out the Draft Declaration and other documents prepared by the Preparatory Committee for discussion in the Congress.
A Video Message from Comrade George Mavrikos, Secretary General of WFTU, was displayed in the screen, in which he congratulated the delegates, wished the Congress success and which was received with great applause by the house.
In the discussion delegates from Cyprus, Brazil, Portugal, Congo, France, Cuba, Mexico, Argentina, Columbia, Canary Islands, Australia, Nepal, Great Britain, Ecuador, Bass Country, Sahara, Bahrain, India etc. participated. The reports from the various organizations from the different countries were educative. The recession and the consequent curtailment of pension and pensionary benefits are resulting in acute difficulties for P andR. The pensioners are on the defensive and are organizing agitations and struggles. While the delegates from all the countries spoke about the attacks on pension, curtailment of TU activities etc., the speakers from Cuba spoke about the more and more benefits that the workers and the pensioners were getting under the socialist government. The great difference between the Socialist Government and the capitalist rulers were clear to all the delegates.
From India, Coms. V.A.N.Namboodiri and D.Gopalakrishnan addressed. Com. Namboodiri in his speech mentioned about the anti-worker attitude of the present government and the valiant struggles organized under the leadership of the Central trade Unions, including the Parliament March and the 48 hours strike on 20-21 February 2013. The organizational position of the NCCPA and AIBDPA was briefed. A note was given to the organizers earlier with all the details and suggestions with regard to the formation of the TUI of P and R.
After discussion, the draft proposals, Bye-law etc. were adopted unanimously. The Trade Union International of Pensioners and Retirees (TUI (P and R) was declared as formed. Office Bearers with Comrade Com. Dimos Koumpouris (Greece) as President and Comrade Quim Boix (Spain) as General Secretary
It was decided that the next Congress will be held at Bahrain after 5 years.
The Foundation Congress and the formation of the TUI of P and R, as part of the World Federation of Trade Unions has inspired the Pensioners and Retirees the world over. It is hoped that this will help the pensioners and retirees organizations in their onward march. More and more organizations may join the TUI of P&R in the near future.